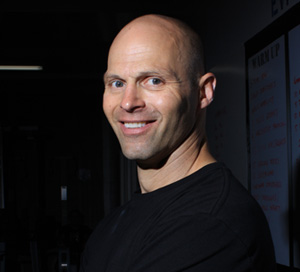 Eric Von Frohlich is founder and leader of the EVF family of companies, including EVF Performance (NYC and East Hampton), CrossFit Upper East Side and CrossFit Columbus Circle.

A recognized expert with over 20 years’ experience in a broad range of fitness, weight-loss, and wellness programs, Eric is a much sought-after coach. His career as a trainer began in 1995 with an after-school program for middle-school children, and grew into a successful personal training business in the Hamptons, Greenwich CT, and New York City. Eric’s program was groundbreaking for its time, providing athletic training comprised of calisthenics, metabolic conditioning, weight training, speed, agility & quickness drills, and nutrition counseling. Over the past two decades, he has shared this approach with a diverse array of clients ranging from elite athletes to adolescents; and from special needs populations to corporate leaders.

In addition to his training credentials Eric is an experienced entrepreneur and thought-leader – running his own personal training business for 15 years, an early pioneer of the outdoor running / Boot Camp training trend, and founding a successful program called RoadFit in 2003. He has been at the forefront of now-hot fitness trends including Spinning (having launched one of the first spin gyms in the Hamptons in the 1990s), CrossFit, and stand-up paddle boarding, and his conditioning class at Equinox (Practice) was one of the first to attract male students in a group fitness setting. Additionally, some of the largest mass market at-home training DVD’s were influenced by Eric and his training methods. His expertise and talent for identifying trends and predicting the future of fitness have resulted in numerous feature articles and interviews across various media outlets. His programs have been featured in Shape, Fitness, Health, Redbook, American Baby, Cosmo, Gotham, WebMD, Fox 5, ABC, Backpacker, The New York Post, and more, and he consulted on the best-selling book “Younger Next Year” (Harry Lodge and Chris Crowley, 2007).

Eric enjoys reading philosophy, surfing, working out and spending time with his wife and two children.